So, we left St John’s late in the evening. 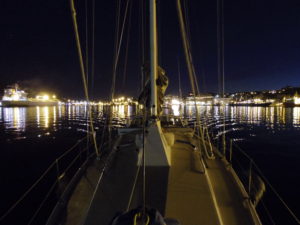 When we started up the engine, it gave the slightest little hiccup, and then carried on as normal. I ran the revs up an down, waited a while, and wrote it off as our first really cold start in a while. Wrong…

We motored for the better part of the first night, about 8 hours without a hitch. Then we got a decent sailing breeze, shut the beast down and settled in for some sailing.

The next night, when it came time for our first charging session, I fired up the engine. It ran for a minute or so, and then promptly sputtered and died. There was also some new belt squeak happening. Now this was quite odd. We filter our fuel before it even gets to the day tank, and there was no sign at all of fuel contamination. But, we did get some truck fuel in St. John’s, from the same outfit that we got the stuff that caused a bunch of smoke in the exhaust last year, so I was fearing that we had a load of bad fuel.

Anyway, I set about the easiest first problem, which is bleeding the system, and discovered some air in the lines. How very strange. I got it bled, fired up, and the engine was running again, apparently ok for the moment. When we ran the RPM up to charging speed, the alternator belts started slipping terribly. A quick look at them revealed them to be totally slack. What the hell? 2 engine problems at the same time?

I figured that the sliding bracket had come loose, so I loosened up the set bolt, slid the alternator to the limit of it’s travel, and found that I still had some very slack belts. Not good. The big, what should be unbreakable, lower bracket had snapped right in two. Shit.

I carry a spare upper bracket, but the lower one? It’s 1/4″ gusseted steel plate, for crying out loud. We have a small second alternator on the engine, and we also have a spare brand new small one, so I knew I could get some charging going, but the big unit is the one we really need if we don’t want to run the engine way too much.

Time to get creative.

Out came the drill, cutting fluid, taps and wrenches. I drilled a hole in each side of the offending part. Next, I had to find a piece of steel to bridge the crack. I dug around a bit, until I finally came across a bicycle pedal wrench that came with our folding bikes. Perfect. I had to bend the jaws around a bit, but it was finally converted into an effective joining strap.

I tried to tighten the belts up, but my repair was too flexible. Failure.

I realized quickly that I needed to provide some vertical support as well. I first tried some line, but didn’t really have a decent strong point to tie to in the right place. I would have to support it from below. I first thought about employing one of the hydraulic mast jacks, but this seemed too complicated, so some shimming was decided on. I hunted around for some wood, ultimately settling on one of those West Marine thru hull plugs as my best candidate. I whittled a notch into it, pried the alternator up as hard as I could, and drove that sucker in. Success.

I’m happy to report that this arrangement made it all the way across the pond without a hitch. The crap we have to do to keep a passage going is sometimes rather unconventional…

Unfortunately, the air in the fuel issue is still happening from time to time, and I’m still struggling with that one. I’ve taken to bleeding the lines before starting up, and that’s been just fine. Once it’s running for a few minutes, it’s a non-issue. I’ll dig into it tomorrow. I’m sure it’s just a loose fitting somewhere that I missed the first time around. It’s nice to be at the dock and be able to deal with these things in a more leisurely fashion.

McGyver would have been proud, had he not been cancelled after a few seasons. 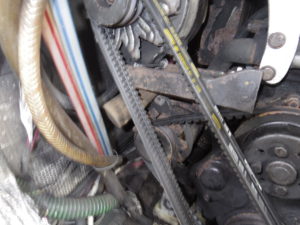 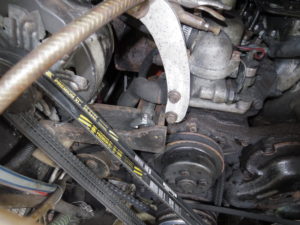