For those who are technically minded, we have included this page which we have unashamedly poached from another website. It’s primarily Bill Lee’s write-up about the boat, with some changes and additions which reflect ongoing projects and upgrading. It’s worth skimming through just to get some idea about the engineering which went into Rocket Science. 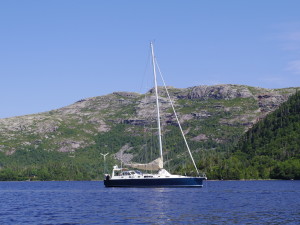 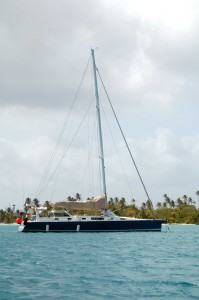 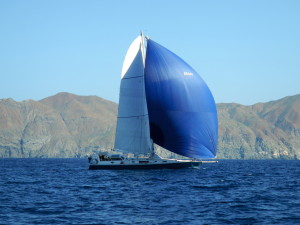 Design Objectives – The RipTide 55 is designed to be the next generation
of club racing and long distance cruising yacht. Rather than a highly
specialized cruising yacht like the Sun Deer or Deer Foot series, the
emphasis is on an all around boat that can be used for club racing and
coastal cruising but is also engineered and capable of long ocean
passages. This is the same concept that Nautor and Baltic have used for
years that has preserved the value of their boats over a sustained period
of time. However unlike Nautor and Baltic who have not updated their use
of materials or available technologies, the Riptide 55 incorporates very high-tech
materials and proven design concepts that have proved themselves
over the years at the highest level of offshore ocean racing.
Extensive use of carbon fiber, kevlar and honeycomb cores has produced a boat with ultralight
displacement ratios and with the strength and integrity that is far in
excess of even the stoutest cruising boats. From the comments below you
will see how using these materials to lower the center of gravity has
produced a very light boat that has an extremely seakindly motion and very
little tendency to pound. Pounding when going to windward has been the
Achilles heel of the last generation of light weight cruising boats. Some
manufactures have even tried to side step this problem by installing large
engines and focus on the virtues of motoring to windward.

Design and Engineering Process – The RipTide 55 used a paperless design
and engineering process. The design, drawing and engineering process was
integrated into one process and was all done on the computer. It is not
uncommon in today’s design world to have one person draw the lines by hand
then turn their work over to another person who then adds the interior,
another person then takes those drawings and inputs them into the computer
after all this is done the plans are then turned over to a structural
engineer who often takes a “cookbook” approach to figuring out panel,
stringer and laminate scantlings. The designer, Paul Bieker, did all the
CAD work, finite element analysis and engineering. Paul is known for his
engineering expertise in structural trouble shooting on large ships and
yachts. Paul is also known for producing this country’s fastest
International 14 Designs and Paul has logged over 50,000 offshore miles
cruising. Paul is one of the few designers that has the ability to
integrate the engineering and design process all in a paperless computer
design that truly has everything meeting in three dimensions. This process
is often used on the large commercial ships but is rarely seen in the
world of yacht design. In addition Paul is on the leading edge of monohull
development by his dedication to the International 14 class which has
pioneered most of today’s speed innovations such as articulating
bowsprits, flexible rigs, and large roached mainsails. Paul also is part of the design team for the BMW/Oracle team, with the latest example of his work being the design of the lifting foils for the AC72 catamaran being used in the America’s cup defense.  Paul’s intuitive
design insights and fundamental understanding of today’s modern materials
has produced a truly unique yacht which is not available anywhere else and
the concepts of which could not be easily reproduced without the subtle
knowledge of how these materials were used.

The Rig – Again nonconventional thinking was applied to make the rig easy
to handle, and to supply a great deal of power. The rig is a carbon fiber model manufactured by Hall spars in 2006.  The swept back spreaders allow for a very stable platform
and a mix of rod and Kevlar rigging keep the weight aloft low while still maintaining reliability.  The large roached mainsail provides a great deal of sail area for the
fractional rig with a height of only 65′ 5″ off of the water line. The
bowsprit allows an asymmetrical of over 2200 sq. ft. to be flown and the
RT55 to carry a downwind sail area in excess of 3000 sq. ft. The purpose
of the rig was to keep the weight as low as possible and to keep the
center of effort of the sails as low as possible.
The sail with its large roach also has a
small gaff at the head.  This provides
an “Automatic Transmission” effect. The flexing off of the head also
instantly lowers the center of effort of the sail.
When looking at the mast you will see that it is mounted on a tabernacle
on the cabin top and that the boom is mounted on the tabernacle not
directly on the mast. This prevents the boom loads from being transmitted
to the mast and pushing it forward and destroying the column loading on
the lower section of the mast. Take a look at most carbon mast breaks and
if there is no fitting failure the great majority of the breaks occur at
the lower spreaders. This is because in a puff the mast head rigs pull the
top forward at the Masthead and the boom is pushed forward at the bottom
and the mast is put into an “S” with the hard point being at the lower
spreaders. With the tabernacle absorbing the boom loading and the prebend it is almost impossible for this condition to occur.
Also mounting the boom approximately two feet in back of the mast and
having it pivot there has two additional benefits. The first is that it
allows the boom to swing farther out before hitting the spreaders. The
second is that when the boom does swing out it automatically adds draft to
the sail since the pivot point itself is now asymmetrical because the
radius of the swing is no longer at the mast but in back of the mast.
Unlike most rigs where the mast is straightened going downwind and the out
haul is loosened the RT55 maintains the prebend and adds draft by the
asymmetrical swing of the boom. The conventional rig raises the center of
effort going downwind, the RT55 keeps its center of effort low and the
deep draft and large amount of prebend keeps the air in the sail providing
lift instead of letting it escape around the front creating those wild
gyrating rolls like a conventional rig.
The problem with a rig with no backstay is that it is almost impossible to
get enough head stay tension. In the RT55 this problem is addressed by running backstays which will create enough headstay tension while going upwind, though the rig does not depend on the runners to stay up.  The
carbon in the hull structure combined with the prebend of the mast allows
the head stay tension to be at least as tight as in a conventional rig.
The head sail is very small at only 610 sq. ft. and is mounted on a roller
furler. Tacking is very easy and the boat is so easily driven that you can
still make good speed in light winds but can also keep the working sail
area up in a wide range of wind conditions when combined with the water
ballast. In essence the first reef is adding water ballast.

Water Ballast – In order to maximize going upwind and power reaching the
RT55 uses water ballast. The amount of water ballast is moderate at 1600
lbs. and reduces the angle of heel by about five degrees. The water
ballast is mounted in the aft flared section of the hull in the aft cabins
where it will exert the most leverage. Most ultralights are not known for
their windward abilities, the water ballast allows the RT55 to power up
and develop driving force similar to a much heavier displacement yacht. As
an example, when returning to Seattle from Hawaii there is an approximate
three day beat to the north that starts the trip. In the RT55 you bring
the angle of heel down under a reefed main and jib to a comfortable 15
degrees but the water ballast combined with the low center of gravity,
deep “V” sections and centralized weight displacement will develop the
power you need to make miles to windward in trade wind conditions. This is
where the last generation of ultralight cruisers become almost
uninhabitable, even when motoring to windward. By being able to use water
ballast to power the boat up on a reach and keep the boom from dragging
the potential of breaking the 300 mile per day barrier for a cruiser is
now possible in trade wind conditions.
The water ballast system is a fully automatic system that is push button
activated in the cockpit by the winch islands and is managed by a
Programmable Logic Controller (PLC). The system is designed to either have
the tanks full or empty. If a tank is desired to be full the system will
automatically fill the tank desired and shut off when full. If a tank is
to be evacuated overboard or transferred to the opposite side a push of
the button starts the cycle and will stop it automatically. There is a
flow sensor wired into the PLC to protect the pump and electronically
actuated ball valves control the water flow. All the equipment is
industrial grade and the ball valves are NEMA IV rated. The ball valves
have a manual back up and in the event of a total power failure the tanks
can be evacuated by the manual bilge pump.

6 electronically actuated ball valves by Harrington
Effector Flow sensor on pump intake controls fill, empty, transfer
cycles and protects pump.
Koyo Programmable Logic Controller controls and coordinates the
automatic operation of the system.
Steering
Dual rudders. Rudders are asymmetrical to provide mild lift.
Rudders are by Advanced Composites and have 3.5″ outside diameter shaft
with an autoclaved carbon wall thickness of .875″.
Steering system has dual outboard pedestals and is a rod linked cobra
system by Whitlock with rack and pinion inputs in the pedestal heads.
There are two 36″ destroyer type wheels.
Each pedestal has a Ritchie Compass mounted in the pedestal.