After a few rainy days in Plymouth, we stocked up on a few provisions and started making our way down toward the Spanish coast. We’d reserved a slip in La Coruna for a month, despite planning to keep RS there for only a couple of weeks. It turned out to be cheaper that way. 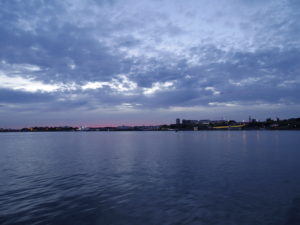 Anyway, the Bay of Biscay and the Western channel had been blowing pretty relentlessly SW’ly, so we took advantage of a decent wind shift to hop across to Brest and wait for a favorable wind to make the hop across to Spain.

Brest isn’t the most attractive place-the waterfront is basically military and shipping terminals, but there’s a decent enough marina stuck in the middle of it all. It served our purposes. 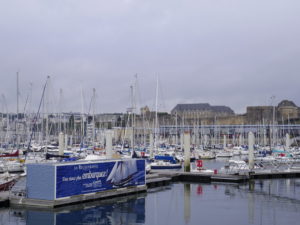 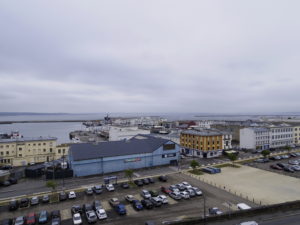 We also got a great introduction to the special breed that the Brittany sailors really are. Around the marina, there’s a sort of Hollywood walk of fame, complete with hand prints set into bronze plaques, commemorating all of the records set by the local boys and girls. It’s really a who’s who list of the highest level of distance racing. 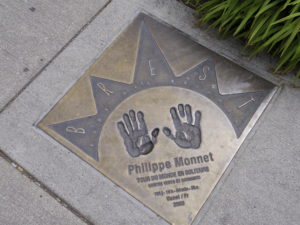 We tied up behind a couple of Open 50’s and a superfast tri. The skipper of one of the 50’s stopped by to ask about Rocket Science. He really liked the boat and wanted to find out who designed her-he had just spent 158 days going around the world solo gathering water samples from the Antarctic convergence, and wanted something bigger and faster. The guy talked about the trip as if he’d just been out for a pleasant outing. Something special was clearly happening in this town… 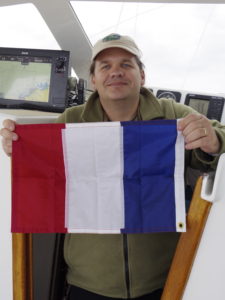 Our second day in town, a gale came through, gusting up into the mid-40’s. The harbor entrance looked like a malestrom, rain was driving in sideways. Not really fit for man nor beast out there, as far as we were concerned. We hunkered down below, listing to the lines creaking with all the surge, the wind shreiking in the rig. Surely nobody would be out sailing on a day like this.

Strangely, I saw mast after mast passing by from my perch on the settee. A peek out the window revealed dozens of happy French crews heading out for a bit of fun. I could see them poking their bows out of the harbor, sheets of spray flying over the boats as they made their exits. I made a quick climb to the top of the breakwater, and found the sound to be fairly loaded with boats, deeply reefed and ripping along. Wow.

Anyway, we spent a week in Brest, waiting for the weather pattern to finally change so we could get across Biscay without any upwind suffering. Finally, we had a 24 hour NW’ly forecast, followed by calms, so we left as soon as the shift materialized, hoping to get across the better part of the bay before the engine was called on.

We did manage to put together a surprisingly rough (at least until we got out into deep water) 230 mile run for our first 24 hours, and then things dropped to nothing as predicted. We motored the remainder of the way, very slowly, thanks to a contrary current. We arrived at La Coruna at 0300, threading our way around a couple of very dense fishing fleets, a couple of freighters, and a bunch of other coastal traffic on our way in. We usually hold off until daylight when we go into a new port, but this one was pretty wide open, so it was safe enough to make a night entry.

We’ll have another update soon about our stay in Coruna, a great road trip, and our cruise down the rias. Great stuff all around.