So, there we were, riding along on our way out from Dutch Harbor for our second trip of the year.

The weather was a little heavy out of the NE, nothing much for the winter season, maybe 40 knots with some gusts pushing 55. The sea was running about 15 feet, again nothing especially noteworthy. I had been reducing speed through the morning. The Constellation has a lot of power and a pretty fine entry, so we have to be a little bit careful not to drive the bow under when it’s nasty out. We were making 4 or 5 knots on the average, riding easy.

At about 1000, Robbie was in the main chair, and I was over on the port side doing some computer work. We were having a little chat, and I was in mid-sentence when something rather unusual happened.

A huge wave broke right over the bow, shattering one of our strengthened pilothouse windows. It sounded like a bomb went off. It came in with so much force that our ceiling looks like somebody hit it with a shotgun. We have a chair up there, and had anybody been sitting there, it would have been seriously bad. Suddenly, we were knee deep in some very electrified water, sparks flying off all kinds of things. A bunch of the electrical stuff started smoking and looking like it was contemplating catching on fire, so we basically had to pull out every power cord and shut off every switch we could get to while standing in seawater. I don’t know how many times I got zapped, but it was way too many. Probably the worst part was going up to switch the steering to manual, because I had no choice but to do it, and all of the sparks around it made it pretty clear that it was going to be unpleasant. Robbie made the mistake of grabbing the metal throttles and paid pretty dearly for that. He wound up using his shoe to get the engines slowed down.

So, there we were, 50 miles offshore in force 9 or so, with a big hole in the front of the wheelhouse, only hand steering, and a single GPS still working. A couple of the deckhands set about getting as much water out of the wheelhouse as they could, and we broke out a paper chart and managed to get back to Dutch under our own power. We had a tug meet us once we got close to town in case we lost steering completely, which was certainly a possibility. I was surprised it was still functioning.

Once there, we started to take stock, and realized that every single piece of electronic gear needed to be replaced. We also figured that all of the outlets and breakers would need to be new. Basically, we needed to gut the wheelhouse and build her again from scratch. In Dutch. During the fishing season. Shit.

So, we flew the crew home pretty much right away, and had a representative of the insurance company pay us a visit within a couple of days. Since I really didn’t have anywhere to go, with Rocket Science buried in the snow or maybe in a paint shop in RI, and Jenny all the way in Europe, I decided to stick around and oversee the project. Computers and the like are a little more in my comfort zone than Robbie’s, anyway. (Robbie is the senior captain on the boat, I am first mate on the trips when we’re here at the same time, in case anybody’s wondering).

Everybody we talked to told us it would take a month to get the boat going. We didn’t buy that. We finally elected to go with Lunde electronics and the Pacific Fishermen’s shipyard, with some other help from various vendors. They seemed to be the most willing to drop everything and focus on us. We began airfreighting dozens of pieces of extremely expensive equipment from all over the world (much of our gear comes from Europe), and also flew in 4 people to be dedicated to the project. Over the next 2 weeks, we ripped out miles of wire and created one of the more valuable dumpster loads in history. We also built a new console, and managed to get all of our new gear installed.

In case anybody’s curious about just how much stuff we have up here in a modern trawler’s suite of electronics, the tally goes something like this:

And last but not least, the XM radio…

I’m writing this tonight, underway again on Valentine’s day. The boat is better than she’s ever been. Every wire run is brand new, labeled, and clean. We used to have quite a hodgepodge of gear stacked here and there, and all is now arranged in quite a sophisticated command center. All in all, I couldn’t be happier to have come out of this thing in such good shape, and in record time. It’s been 20 years since I was last on a boat that this happened to, so I’m really hoping that I’ve paid my dues on the window front and won’t have to see another one of these episodes.

Sorry about the poor picture quality, the camera got wet too. 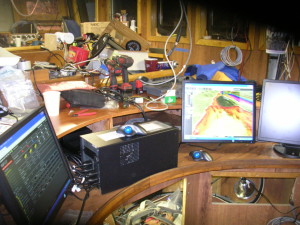 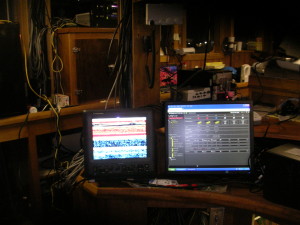 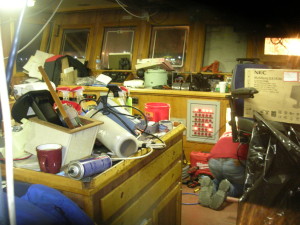 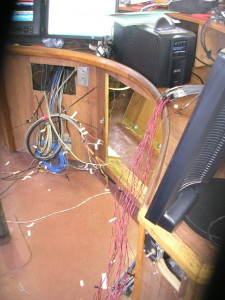 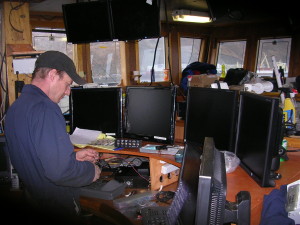 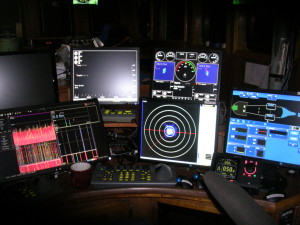 3 thoughts on “The million dollar wave”