After the usual delays and chaos of trying to get our beloved Constellation out of Seattle and on it’s way to Dutch on time, we managed to leave just a day late. That’s pretty much par for the course.

We elected to transit the inside passage as far north as Queen Charlotte Sound or Dixon Entrance. There was a bit of a blow happening offshore, and running up inside for a day or two would give the guys some time to get everything secured for the crossing of the gulf anyway. This choice of route would influence our thinking in what was to follow.

I managed to get a short nap and then turned up for my watch at 2300 or so. All was well, the boat was running fine. Our engineering team seemed to have everything in good order. Time to settle in for the first night watch of many.

At about 0100, I started to feel the most peculiar pain in my back. Like nothing I’ve ever felt before. I wrote it off as just some soreness, though. I hadn’t been doing much in the way of physical work lately, so perhaps that was the culprit. By 0300, the pain had migrated around to the front of my torso, and by 0600, it had moved up right into the middle of my chest. It was really pretty excruciating, and while I felt like I was able to tough out a belly ache, pain in the chest is a different matter.

Remember that we’re navigating a boat with 32 people up through narrow passages. There’s really no room for error. While I didn’t really think that I was having a heart problem, there weren’t any other symptoms indicating that was happening, it was a possibility. It would have been irresponsible to just ignore it and carry on without consulting our shoreside medical provider. Besides, by this point, it hurt like hell all through my torso. Something was definitely up.

So, reluctantly, I picked up the phone. I got the answer that I expected from the doctor. There’s really no way to diagnose this sort of thing from afar. Pancreas, spleen, ulcer, and kidneys were all thrown out as possible culprits, but he was pretty confident that there wasn’t a heart problem happening.

Well, that was good enough for me. One of the things we big tough fishermen pride ourselves on is our indestructibility, after all. I wasn’t going to let a little bellyache stop me from going north.

Until I laid down…. Holy shit. Agony. I gave it about an hour and then asked Robbie to see if Tate could drive up to Anacortes and hop on the boat while I got checked out. There was just no way I was going to be able to perform my duties with this going on. I needed to find out what was happening.

We were about 70 miles past Anacortes, so we told the Canadian traffic service what we were up to, and that we didn’t want to put into a local port just to get avoid the hassles of customs. That was fine with them. When we got back into US waters, however, the traffic folks there were already well armed with questions and a few numbers to call. I called the USCG myself to explain what was happening, and that there hadn’t really been a casualty, but that I suspected that I’d passed a kidney stone or a gallstone and we decided to swap crew out while we were able to do so easily. VTS was ready to send 3 fire trucks and an ambulance to meet us at the dock. (I think that they have really boring jobs, so they get all excited when they get to do something unusual.) I got them calmed down and got ready to hop off the boat.

Just on a personal note, I was feeling pretty down about the whole episode. I’ve been fishing for 25 years, and have never had so much as a hangnail (not officially, anyway). Now I was responsible for the boat having to turn around and head back to port, losing time and money.

While I work for an excellent organization, human nature (particularly in today’s very litigious world) does sort of cause people to change one’s view of an employee when they have a medical issue. A guy can go from being an asset to a liability in a heartbeat. I had just signed a 75 day contract 12 hours before this happened, meaning that my employer was on the hook for this despite me being insured personally. The timing might be seen as suspicious. Now, I’ve never had anything like this happen before, and I would have investigated it prior to going to sea if it had, but not everybody has the same scruples.

Anyway, suffice it to say that over the years I’ve seen some good guys get hurt or sick and they never show up on the boat again. I’ll see them in Dutch working for somebody else. This hasn’t really been the case with my current outfit, but it does happen pretty often.

Of course, I don’t honestly have these concerns, this is obviously legit and not a chronic problem that would cause concern to my bosses about long-term liabilities. But, in the lead-up to this all happening, the potential career consequences were something that I couldn’t help but consider. And at this point, I really didn’t know what I was dealing with. A heart problem would basically mean that my USCG license goes into the shredder… Scary stuff all around.

So, after muddling through all the self-imposed psychodrama, we arrived in Anacortes last night, and I made my way up to the emergency room. After a few hours, an ultrasound and way too many tubes of blood, it was determined that my gallbladder was loaded with stones and pretty badly inflamed. It needs to get cut out ASAP. They will let me fly to FL and do it there, so that’s good. Jenny can tend to me while I convalesce. My understanding is that it’s really a pretty basic thing, and I should be back up and in Alaska within a couple of weeks.

For my part, I’m probably the first guy to ever be ecstatic about getting the news that I need to have a part removed. The problem has been identified, the fix is not terribly hard, and everything else checks out just fine.

And it turned out that turning around and getting off the boat potentially saved us from a much bigger problem later, when the logistics of dealing with this would have been much harder. It was the right call in the end despite my reservations.

Time to book a flight and get home. I should be fishing by the first of February. 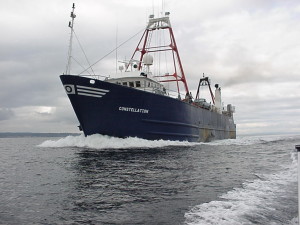 2 thoughts on “The Gallbladder Blues”