We arrived in Florida at the end of November, and cruising is on hold until March. We can’t really ‘cruise’ FL anyway, thanks to our mast height and draft, so we’re just sticking around one place doing some boat chores and enjoying the warm temperatures. We’re pretty happy to just stay put for the season anyway. Our only complaint is all the no-see-ums. Everything from the knee down is awfully itchy most of the time around these parts. 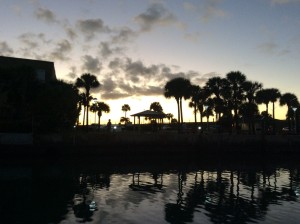 With all our free time, we’ve taken the opportunity to go to Seattle to update some of the training that I need to stay current on for my USCG license. 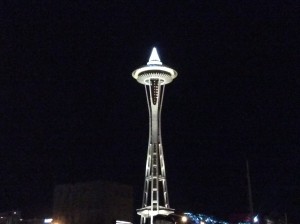 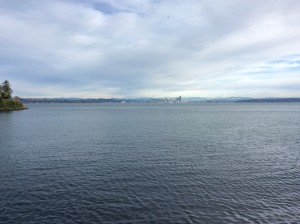 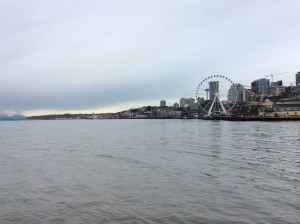 We also drove our little cheap beach car (his name is Hans-Dieter) all the way to Texas and back for a visit with some old friends. 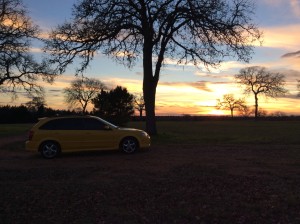 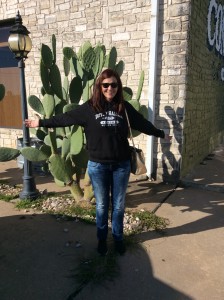 Dennis and Linda are long-time boaters who we first got to know in Puerto Vallarta. We occupied the same dock for a couple of years. At about the time we purchased Rocket Science, they sold their very nice Hunter 460 and moved onto a large plot of land outside Austin. Dennis is a chiropractor, and he’s opened up a practice there.

We hadn’t seen them in a couple of years, so we were looking forward to doing so. After getting off I-10, our navigator had us traveling down smaller and smaller roads out in the middle of nowhere until we got the announcement that ‘our destination is on the left’. A gate stood there with a one lane dirt track leading off over a hill. Dennis buzzed up on his 4 wheeler and let us in, leading us down the 1/2 mile long driveway to their house. This struck us as a rather unusual departure for them, having always been on or near boats, but it was a fine piece of land with lots of open space for their 2 new dogs, with plenty of hunting opportunities. More on that later. 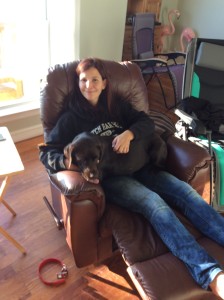 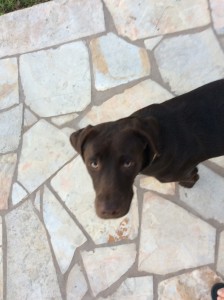 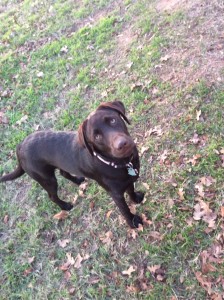 We were pleased to pick up right where we left off with those two, everybody babbling all at once catching up on what had happened in the past couple of years. Old friends are really the best kind. It turned out that they saw a good opportunity in their field in TX and decided to give it a go, rather than return to their original home turf in Oregon. It seemed like they were doing just fine there, enjoying a lot of the more rural aspects of living there. Dennis in particular is a keen sportsman, so he was really enjoying all the time he got to spend outside.

Baxter loved the place, of course. He tried for all he was worth to keep up with the 11 month old Labs, but our old guy just doesn’t have that kind of zing in him these days. Several times a day, one of us would hop on a 4 wheeler and run the dogs at about 30 mph. Baxter, never wanting to be left behind, would run along behind for a half mile or so. One of the first times I took them all for a run, I stopped to let little Bax catch up, and he sat down right next to me with the saddest look on his face, so I asked him if he wanted to ride along with me. He started wagging straight away, and our new system was for him to run along until he got tired, and then I’d pick him up and ride around with him happily perched on the gas tank while the other dogs ran along. 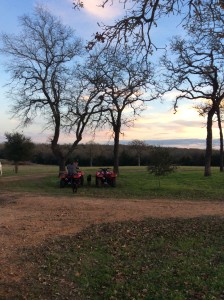 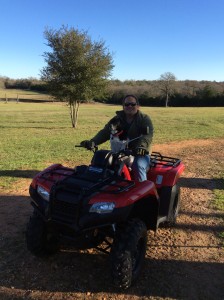 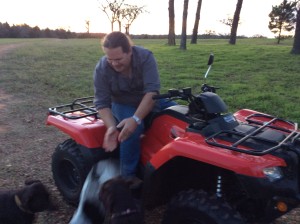 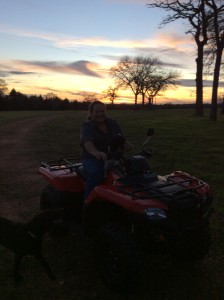 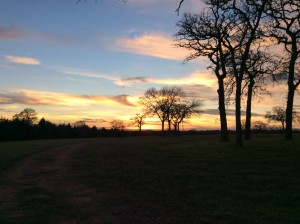 Even so, the poor mutt was totally wiped out at the end of each day. We took the whole pack to Cabelas (an outdoor store) one day, and Baxter just couldn’t bring himself to walk along with us at the store. He spent our time there riding around in the shopping cart. Our little prince. 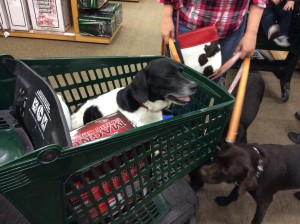 In other dog news, one of the neighbors there has a huge Armenian hunting dog. Linda and Dennis were concerned that Baxter might get himself hurt by this beast, as their dogs had had a few dust-ups with her. Well, as soon as this monster saw Baxter, she flipped over onto her back and became the most docile, submissive animal one could ever imagine. She was totally in love with her new pint-sized buddy. Nobody could believe it. I guess our little stud’s still got it after all these years. 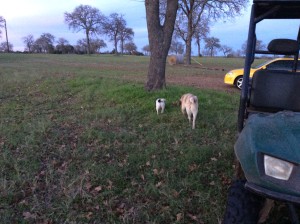 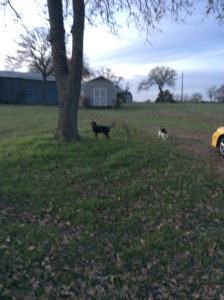 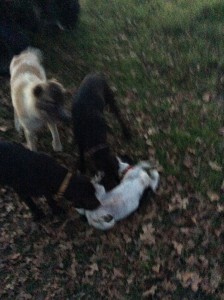 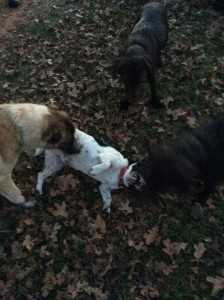 Some background on Texas is in order for those who don’t know. First, they REALLY like their guns in that state. Dennis had us do some target practice. Jenny took to that pretty well. 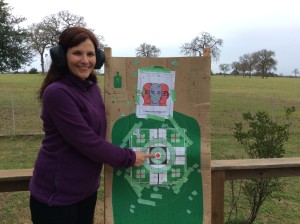 Second, they have real problems with wild hogs. And skunks, we were to learn later. Dennis is happy to do his part to help control the critters. This is best done at night.

So, our first night there, I saw Dennnis outside. He was holding a rifle up to his shoulder, his eye bathed in an eerie green light. Night vision! How cool is that? I went out with him and took a look around, and he told me about all the problems with hogs, and how the skunks were always burrowing under the house and spraying both the house and whatever livestock or dogs came too close. It was his mission to eliminate both. Well, ok, I’m not all that keen to shoot animals, but we were in Texas after all, and if that’s what they see as necessary there, it’s not my place to disagree. When in Rome and all that.

He also told me that the local skunks had the very unsettling trait of running toward whoever was shooting at them. So, if you miss the first time, odds were good that one of them would charge you with the intent of really ruining your day.

Now, I haven’t shot a gun in years, and really was never very good at it in the first place. But, testosterone being what it is, I was honor bound to immediately profess my desire to engage in this seemingly foolhardy activity. Jenny also agreed to come along. I don’t remember if we told her about the attack skunks beforehand.

Night 2 found the 3 of us walking around out in the pasture. Jenny and I were completely in the dark except for a bit of moon, and Dennis was scoping around for hogs with the night vision. I was secretly hoping for hogs at a distance. The damn skunks could stay in their burrows. I wanted no part of them.

Suddenly, Jenny tapped me on the shoulder and said that there was something small moving about 10 feet in front of us. I put the flashlight on it, and was horrified to find a mutant skunk staring back at me. I really didn’t want to blast the poor critter, but that was the stated goal for the night, so I did. Fortunately, he was pretty close so I didn’t miss him and get to test out whether or not he was going to charge.

I still don’t really know what to think about the whole episode. I understand the need to take care of vermin around a country house, but I did feel a little guilty for blowing this little guy away while he was really just minding his own business. A bit of a moral dilemma for me.

Anyway, that shot ended any chance of hogs coming around, so we concluded the night’s activities.

We spent 4 very enjoyable days there, and then made our way home. I’m happy to report that our little beater beach car performed flawlessly. All in all, we felt like we did all the appropriate Texan things: shoot, eat red meat and buy some Cowboy boots! 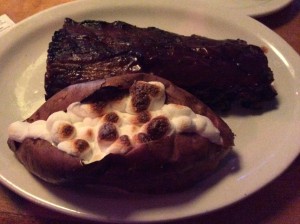 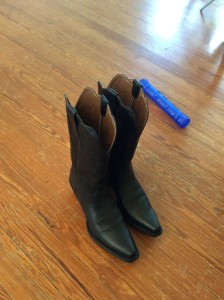 We returned home to take on our major chore for this stop, changing the bearings on one of our steering pedestals. This will probably warrant it’s own entry by the time it’s done.

Happy holidays to all. 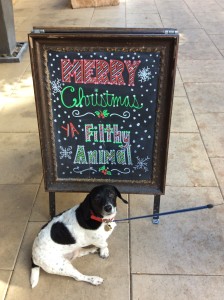