I arrived in Orlando on a Thursday, and had managed to schedule the removal of the offending organ for the very next day. This was actually quite an achievement. I cold-called probably a dozen places, and just couldn’t get any traction with most of them. My side of the conversation generally went like this:

‘Hi, I’m in WA, but need to have my gallbladder removed in FL, and soon.’
‘I don’t want to do it in WA, I want to do it in FL.’
‘I don’t have a primary care doctor.’
‘I know that I need to have it removed because the ER doctor in Anacortes says that it has to be done. I have the paperwork.’
‘No, I’m not willing to schedule an appointment with your preferred primary doctor in March. This has already been diagnosed, and needs to come out’
‘No, I’m not a FL resident.’
‘I don’t have a home address other than a mailbox, I live on a boat.’
‘No, it’s not because I’m homeless and can only afford to live on a boat.’
‘Who said anything about being indigent? I don’t need to go to the damn county public health service.’
‘Good god, thanks for your time, I’ll keep calling around.’

Finally, after endless variations of this, I found someone who would actually schedule the procedure in a timely manner.

The OR was booked, and we arrived at the FL hospital on Friday AM. I got prepped for the surgery, and after a couple of hours of waiting got to meet the surgeon, Dr. Childers. I don’t think that he was really briefed ahead of time about my case. He seemed a little bit confused about how I came to be in his care. I explained that I had been at sea on the W. coast when it happened, but lived on a boat in FL currently, but didn’t really live here either. We talked a bit more about our lifestyle, he looked at my info from the ER in WA, and decided he was fine to proceed, and we’d go into the OR shortly.

He turned to leave, then stopped and turned back, and looked at us with the most queer wistful look on his face.

‘So, you’re 43 and spend half the year sailing all over the place on your yacht?’
‘Well, yes, but it’s really not all that spectacular most of the time’

Wow. Jenny and I exchanged a look. I told him that he was a SURGEON for god’s sake, and his accomplishments and contributions to humanity were in an entirely different league than our little self-indulgent wanderings. I was pretty gobsmacked by the exchange. I would not expect to be envied by such a man. I guess he’s probably dedicated his whole life to education and work, and he probably needs a year off. I hope he takes it sometime.

Anyway, the surgery was uneventful. They told Jenny that my gallbladder was actually really bad, and the procedure was a little more traumatic than usual. Something about it being stuck to the liver. Yuck.
Jenny got to experience hospital staff that really cared and made an effort to ensure that the patient’s loved ones were well taken care of. They had a special surgical waiting area where she had to sign in, got assigned a number under which she could be reached by the doctors if necessary, and got TJ’s assigned patient number. Up on a board that reminded her of the arrival/departure monitors at the airport she could follow the stations TJ went through: prep, surgery, wake up room. 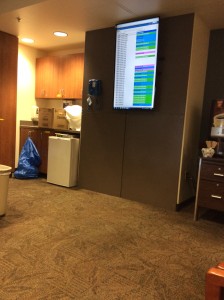 A great service for a concerned wife, not to mention the comfy chairs, blankets, tea, juice and good coffee. Yes, good coffee, not the shitty stuff!

I got to spend the night in the hospital, really just a blur of morphine and popsicles for me. It hurt like hell even with the drugs. At least Jenny got to enjoy the nice view. 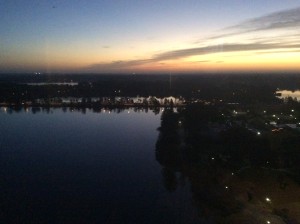 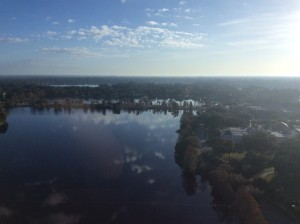 The following week was a pretty druggy haze for me too, but once I got the drain tube out (which I was to learn was stuck nearly a foot into my torso-it felt really weird on the way out), I started to recover quickly. It’s now been 2 weeks since the operation, and I’m about at 100%, just with a couple of new scars. I’ll fly to Alaska on Tuesday.

I’m very happy to have this all over with. In retrospect, it was really the best possible outcome. Of all the things that can go wrong in one’s torso, I’m quite happy that the one thing that went wrong was a non-essential component. Everything else is good. Many many thanks to Dr. Childers, who did an excellent job and actually took time to make sure I was okay and to hear my life story. Nowadays doctors always seem to be in a hurry, and it was nice to meet one that made us feel well taken care of. Big thanks to the fabulous nurses Katie, Joy and Angie and the Florida Hopsital.

Life continues on as normal.

1 thought on “Surgery, fun for all”