It’s about 120 miles from Portimao to Rota, Spain-this is from memory, so forgive me if I’ve got the figure wrong.

Anyway, we had to leave Portimao before dawn in order to get into Rota before dark. So, we set the alarm for 3AM, and quietly left our berth once we’d been properly caffeinated. The trip over was nothing special-lots of fluky wind-0 to 30 knots at times. Odd, actually. We managed to make some good speed in the puffs, motored in the calms. I think that i set and doused the main 5 or 6 times, then the wind finally died and we motored until the last bit. This didn’t bother me, I was sick of messing endlessly with the sails, anyway.

About a mile from Rota, things increased to 25 knots or thereabouts, which would, of course, make the marina trickier. Oh well.

We were there early enough to enjoy a nice walk around with the mutt, and we realized very quickly that this was a really great town-prosperous, clean, friendly. Great! There’s a big joint US/Spanish naval base here, so I’m guessing that there’s a lot of income generated by the place. We saw lots of obvious US Navy people enjoying shore leave in town. The tourist season had ended, so things were pretty quiet, just our style. The waterside discos were shuttered, as were the bars, but the town itself was plenty lively for our taste. We liked it a lot.

After a couple of nights there, we ditched poor B (no dogs over 8kg on the ferry) at home for the day and hopped the ferry to Cadiz. This is generally considered to be the oldest continuously inhabited city in Europe, going all the way back to the Phoneticians. It’s been presided over by them, Moors, Romans, and during Spain’s voyages of conquest, it was a major port for those activities, too-and therefore a very rich city back then. The architecture shows it. We hit the major sites, involving lots of walking and a climb up a really tall bell tower for good measure. Well worthwhile. 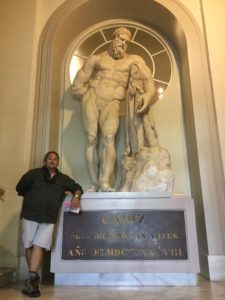 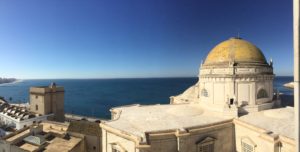 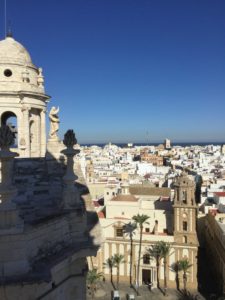 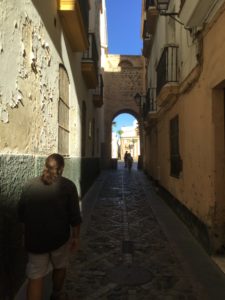 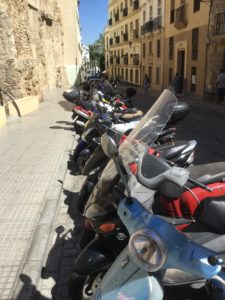 Of course, we felt guilty about ditching the dog, so our visit was brief.

We spent one final day in Rota, waiting for a fair wind for the trip to Gibraltar, and then had a quick trip down there, passing Cape Trafalgar on the way. I liked being at the site of the battle that cemented Britain’s dominance over the seas for decades. Africa was also in view. 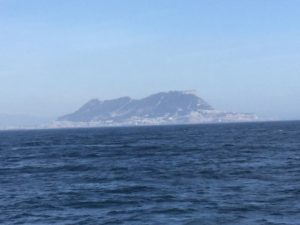 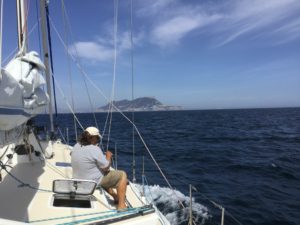 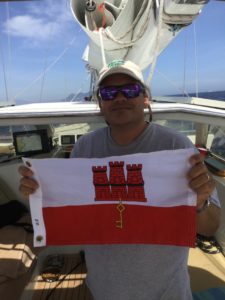 The straits of Gibraltar are interesting from a weather perspective. It basically either blows E or W, and it’s generally substantially stronger at the downwind end. Unsuspecting sailors have a long history of enjoying a fine spinnaker run at one end, only to find themselves dealing with a white-knuckled, out of control douse by the time they get to the other end.

For our part, we’d read up on it, so we didn’t get caught unawares. Of course, we were faced with this strong wind when making the marina approach. This was going to be our first med-mooring ever, and neither one of us was looking forward to tackling it in 30 knots! I called ahead to the marina guys, and they reported that the winds in the basin were just fine, so we made our way in the narrow little entrance, after dodging all kinds of commercial traffic (Fuel is duty free in Gib, so it would appear that every ship for 1000 miles is bunkering at anchor there-it’s loaded with ships), we made the tight turn into the marina.

I’m proud to report that our first med-mooring was flawless. It turns out that it’s not really bad at all. Boats are expected to lay against each other, so everyone sticks out lots of fenders. The general idea is to just get the boat in, lay on your neighbor, and then get sorted out. I’d had visions of it being far worse. It probably will be when we have to use our own anchor, but this place has lines anchored to the bottom ready to use. It’s really not much worse than a conventional dock, really. A little more hopping around handling lines, but it’s ok.

On the way down the dock to check in, we noticed that everyone had their stern lines doubled and tripled up, with motorcycle tires and big springs for absorbing shock. This was a bit ominous. I asked one of the neighbors, and we learned that during the right conditions, the marina was subject to a lot of surge. We missed that part in the brochure.

So, job 1 was to get a proper mooring setup rigged up. I went down to the chandlery and bought a bunch of 3/8″ chain, some 22mm 3 strand poly, shackles, and thimbles. I set about splicing up a bulletproof setup, and RS is now lashed to the dock with 6 lines, some to cleats, and a couple to the primary winches. Hopefully that’ll do the job…

Gibraltar’s an interesting place. They’re very proudly British there-Union Jacks are everywhere. The town itself is pleasant, but the population density is pretty high. The real gem of the place is the rock itself. There are a few really fantastic hikes to be done, and once one gets over the sense that the apes are intending to maul you, they’re really enjoyable hikes indeed. A bicycle circuit of the rock’s a fine thing to do as well. All in all, we’re happy there. 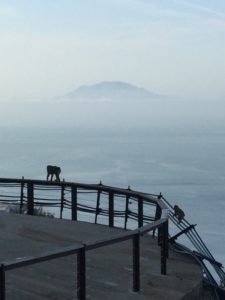 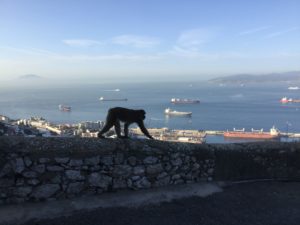 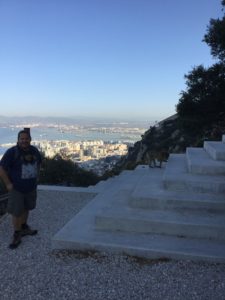 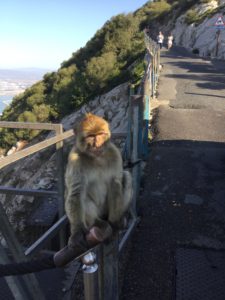