Our trip down the Portuguese coast was just a 2 stop affair. We had a deadline to get to Portimao to meet Jenny’s parents, and most of the coast consists of pretty shallow entrances not really fit for a 10′ draft.

So, we had a gorgeous spinnaker sail from Baiona to Cascais, just outside of Lisbon. We never did find out for sure how deep the marina was, so when we arrived and met an outbound Volvo Ocean Race boat, we knew we were all set. We tied up at the reception berth, got some fuel, and were directed to our berth for a couple of nights. The marina had a bit of a sterile, utilitarian feel (our view was of a huge concrete seawall), but it worked well enough for a rest. 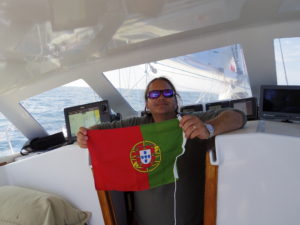 The town itself was a pleasant place to spend some time, with lots of good restaurants and a big music festival going on. Unfortunately, it was sort of a euro-pop lineup-not my thing. But, anyway, it was a lively spot.

I also had the good fortune to find a dive shop and get a new tank. My old aluminum 80 was leaking at the valve, and I was honestly afraid that it was going to blow up and destroy the sail locker once I discovered it. So, I let all the pressure off and condemned it. But, I really don’t like sailing without a decent underwater air supply, in case we hook up on some gear or other debris and I have to go cut it off. So, this was a good development.

We sailed straight from there to Portimao, about an 18 hour ride for us. We left at the crack of dawn, and had an absolutely windless motoring trip down the coast. After we rounded Cabo S. Vincente, we did get a bit of a breeze, but that was just the last 20 miles or so. I didn’t even bother to set the main-we were going to be there after dark anyway, and honestly, I was just feeling lazy. 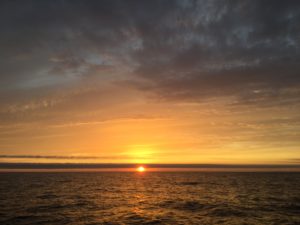 We made an easy night arrival, and scoped out what was supposed to be our berth. The finger piers were about 30′ long, and most of the boats there were in the mid-40′ range. I figured there must have been some mistake, so we tied up along the floating breakwater for a little snooze, figuring we’d get sent to a properly sized berth in the morning.

Well, it turns out that 30′ piers are used for boats to about 60′ in Portimao, so we secured the best we could (sort of like med mooring without bow lines) and set about exploring our new temporary home. 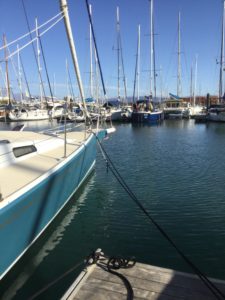 Portimao was nice enough. It’s easy to see why the Algarve is so popular with Northern Europeans for their summer break. There is sand, surf, sun, and bars in abundance, along with the tourist shops that cater to the visitors. There wasn’t all that much else on offer, it sort of felt like an old-world version of Cabo or Cancun. But, it’s very well sited for this, and the weather was gorgeous every single day we were there, and really hot-a big change from the coast further north.

Jenny and I were both uncomfortably warm for the first time since we left Charleston, some 14 months previously.

Anyway, Jenny’s mom and stepdad arrived the day after we did, and we spent the next two weeks being proper tourists, even making a day trip to Lisbon.

Next stop, Rota and Gibraltar… 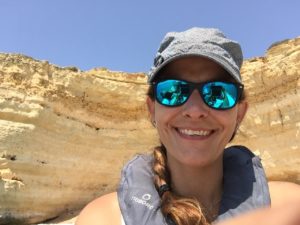 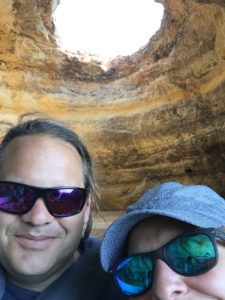 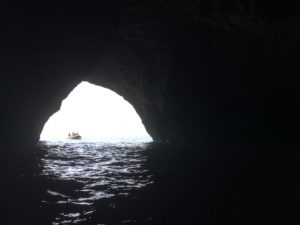 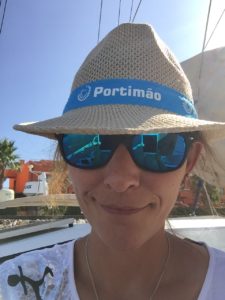 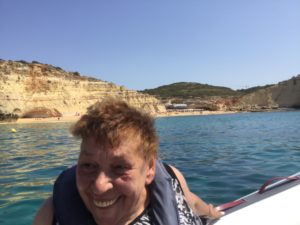 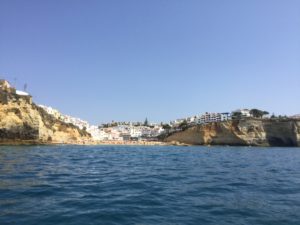 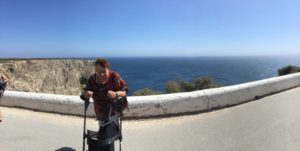 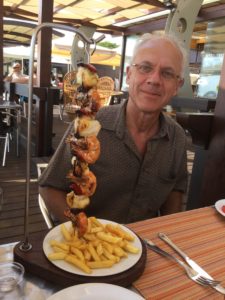