I would like it to be known that I’m married to the greatest woman alive.

There’s a saying that’s been attributed to John Wayne, I think: ‘True courage is being scared as hell, and then saddling up anyway.’

I don’t think that Jenny was ever ‘scared as hell’, but the potential for the Atlantic crossing to be truly shitty was certainly not lost on her. Most women out there would have had their husbands find a few of their buddies to make the crossing, and then fly to the other side. Hell, I would have taken this option if it were a possibility! This is actually quite common for the longer crossings in the world of cruising. Let the boys do the long passage and then enjoy the sailing once it’s over with. There’s nothing wrong with this, but I have to say that I’m really proud of Jenny for taking this trip on.

Nice job, my dear. The next time we cross the pond, it’ll be in the trades, promise. 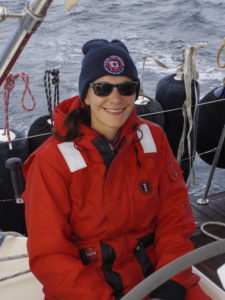