After our road trip, we spent a couple of days in La Coruna, and then headed out for some leisurely cruising down through the Spanish rias. This is a really beautiful part of the world, with nice anchorages and interesting towns to visit. As an added bonus, the distances between stops is really short, nothing’s more than a daysail away. Nice.

Our first stop after leaving La Coruna was the small town of Corme. It’s just got a small wharf for local fishing boats, so the yachts anchor up between the ‘viveros’ (aquaculture rafts) and the shore. It’s a pretty tight little spot, and our first crack at anchoring revealed that we were way too close to some abandoned cables which were invisible before the tide went out. So, we shifted a little bit away from that, and enjoyed a quiet night off the small waterfront. It was actually the first time that we’d been at anchor since we’d been in Newport on the way south from our first visit to Newfoundland! Everywhere we’ve been of late has been pretty much a dockside show. It was nice to get the hook back down and enjoy some proper peace and quiet. 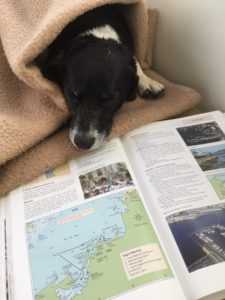 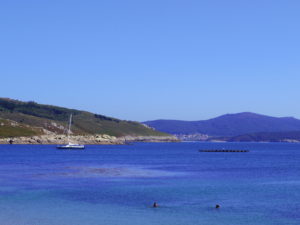 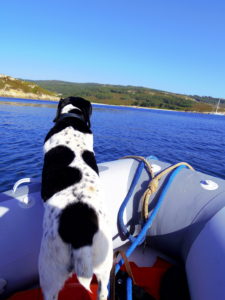 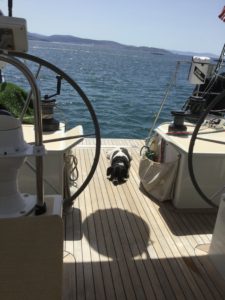 After just one night, we carried on to Camarinas, an attractive town with a smallish, somewhat dumpy marina. The several anchorages were all gorgeous, though, so that was an easy choice for us. Anyway, we were still keen on getting back into anchored life. There was plenty of opportunity for dinghy exploring, a great beach for Baxter, perfect temperatures. About as good as it gets. We stuck around for a few days. 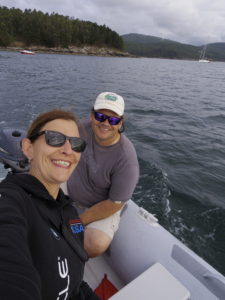 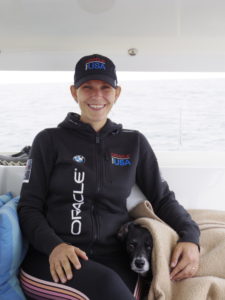 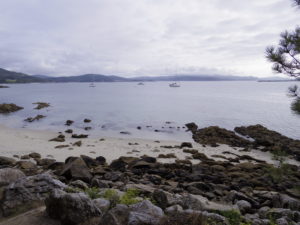 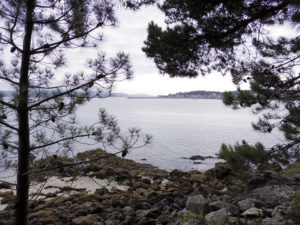 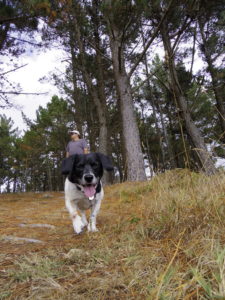 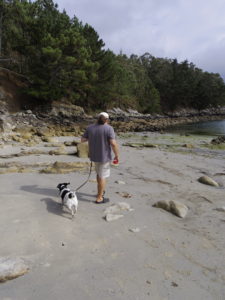 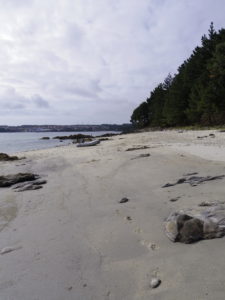 Next up was getting around Cabo Finisterre and the town of Muros. Another nice fishing village, with a busy marina full of cruisers. We got tied up in a tricky berth in high winds, after a bit of a crash landing thanks to the dock hand deciding that he needed to stop the boat with the spring line before it was in the slip. 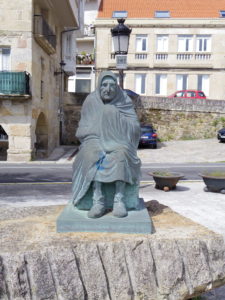 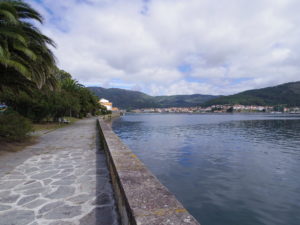 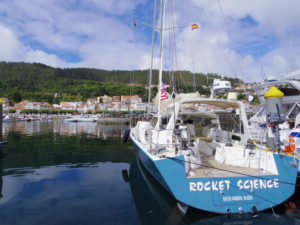 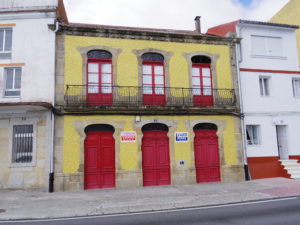 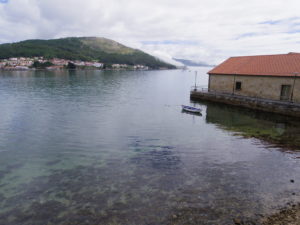 By the way, to those of you reading this who may be newer to sailing- It’s REALLY common when you’re bringing a boat into a slip to have a well-intentioned helper take a line and then stop the boat while you’re not yet in the slip. Invariably, the bow or stern swings in hard, crashes into the dock, and they then look at you with a look of great surprise, as if to say ‘what did you do??’ Let the person driving the boat stop it with the engine, unless they ask you to do otherwise. End rant.

So, after getting over the trauma of our landing and a small paint chip, we settled in for a few days. Shortly after our arrival, an American boat arrived, and the next day, another one showed up. We’d not seen any US boats to speak of, with the exception of a couple of new ones which had been purchased in France and were awaiting delivery. It was apparently quite noteworthy, the marina staff told me they’d never had 3 yanks in there at the same time. Nice folks, too.

Next stop was Vigo. I wanted to take a look around the city, so we booked into the only marina that could take us, well to the west of town. The marina was nice enough, but it was in a location that was just awful. It was way out in an industrial area, and it was a 90 minute walk through a warehouse district with trash all over the streets and graffiti on most of the buildings to get to the outskirts of town. It wasn’t dangerous, but just really ugly. 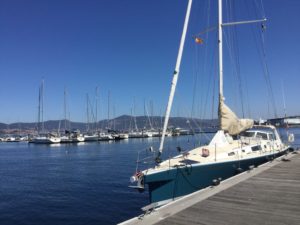 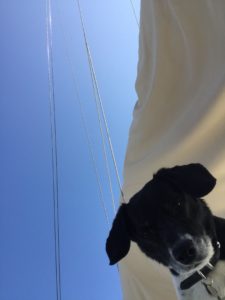 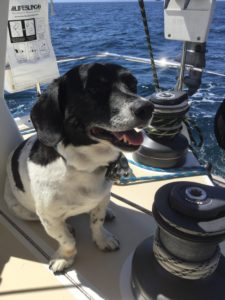 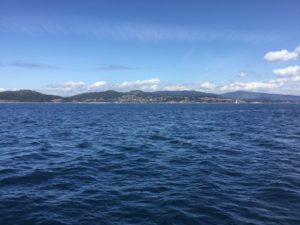 Vigo was ok, but not really our cup of tea. We got out of there pretty quickly and headed to the small town of Baiona. Much better! And, we could anchor there too. On our way in to the anchorage, I was eyeballing the marina covetously, though. It looked really nice in there. I mentioned to Jenny that there was a nice, big T-head that we could tie up to, have power, easy dog walking, all the comforts. She rolled her eyes at me and my decadent tendencies (anchoring is free, marinas cost typically somewhere between 50 and 100 euros a night), and I realized that I was indeed being a bit of a profligate fool. So, we went off to the anchorage, and to both of our great surprise, the anchor windlass wouldn’t work! Off to the marina after all. I guess it was meant to be. It turns out that the little hand control for the windlass broke. It’s since been replaced, all good. 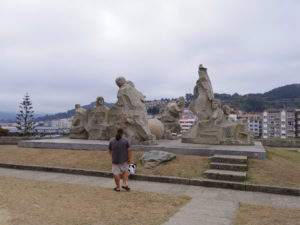 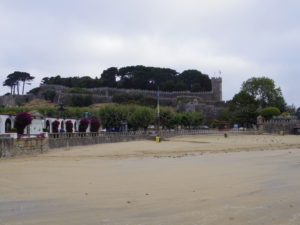 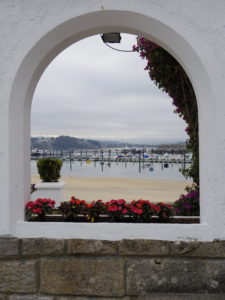 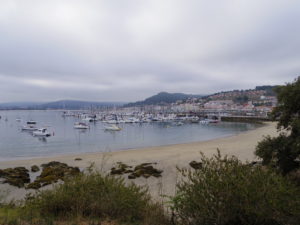 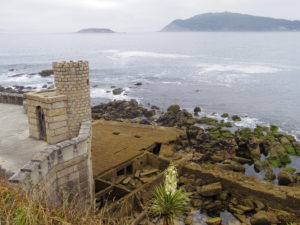 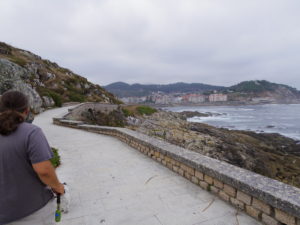 Baiona was great. It was the first place to learn of the success of Columbus’ trip in 1492. The ‘Nina’ (if I’m remembering right) arrived there.

Anyway, it’s a gorgeous place, full of history and great walking. We loved it. But, Jenny’s mom and stepdad’s arrival in southern Portugal was rapidly approaching, and we had to get out of there after just 2 days.