Ok, it’s not really as bad as Orwell’s vision, but we have had an absolutely mind-bending time trying to jump through all of the hoops that are in place over here in this part of the world.

Jenny and I were sitting in Falmouth, discussing winter plans. Rocket Science has until February to get out of the EU, for at least a day. The vessel gets 18 months after arrival to either get out or pay VAT. This is a tax of about 20%. We’ve sailed to lots of places, and never have we faced an expense remotely as onerous as this after such a short time.

But, the good news is that one can sail out of the EU if needed. Norway and the Channel Islands are both available in N. Europe. Gibraltar, Turkey, and any of the African countries are options to reset the clock on VAT.

Our original plan had been to sail to Norway for a little while this summer, and then sail to Gibralatar for a winter berth. But, thanks to Baxter, we are not allowed to sail into the UK after leaving. Essentially, we would have to negotiate the lee shore of continental Europe, and would have a poor departure point for the crossing of the Bay of Biscay, thanks to the prevailing winds and continental shelf.

So, we concocted the scheme where we would leave the mutt with Jenny’s mom, and then reclaim him via ferry or airplane before leaving for Gibraltar. Ok, a pain, but still workable.

Further research revealed that Gibraltar would only allow the dog entry if we could prove that he was in the EU for the previous 6 consecutive months. Since Norway’s out of the EU, our trip there to get outside the union would end up effectively barring us from entry into Gibraltar.

So, we figured that we could bypass Norway, spend the summer in Scotland, and then sail on down to Gibraltar in plenty of time to beat the clock on our temporary importation’s expiration. No problem. We were a little bummed to miss Norway, but here in Europe nothing is too far away, we could always go back later.

But, while we were sitting around in Falmouth waiting for a weather window for the trip north, we availed ourselves of the opportunity to learn a little more about how customs rules were being enforced in southern Europe.

We discovered that even though Gibraltar is outside the EU, France and Spain don’t necessarily recognize a visit to the rock as sufficient to reset the VAT clock. They might, but they also might not. What?!

We’ve had some experience with the varying interpretations of the rules here, so it wasn’t a terrible surprise, but it’s awfully frustrating to deal with, since all of the EU countries are operating under the same laws. Identical questions to different countries will often yield opposite answers.

So, we were still faced with getting the boat out of the EU. Norway was out because of the mutt and weather routing, Gibraltar may or may not have been out, depending on who you ask, Turkey’s awfully far away, and I wasn’t all that keen to go to Morocco or Tunisia. Sailing in there with a US flag waving in the breeze seems to be sort of asking for trouble. Maybe I’m being paranoid, but it just seems ill-advised right now.

What was left? The Channel Islands. So, we reluctantly scrapped the Irish plan and turned tail, sailing back to Plymouth from Falmouth. There we ditched the dog, boarding him at a very nice little luxury retreat in Cornwall. It’s illegal to sail into the UK with a dog unless you arrive from Ireland, even if you’ve just crossed to the Channel Islands and back, so he couldn’t come.

So, we made the 90 mile hop over to Guernsey, topped up on some cheap fuel, got the boat out of the zone for a couple of days, and then sailed right back. Mission accomplished. We think. 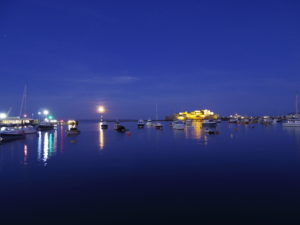 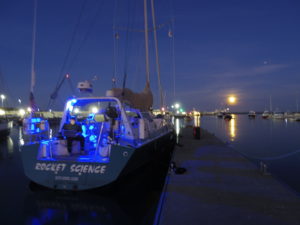 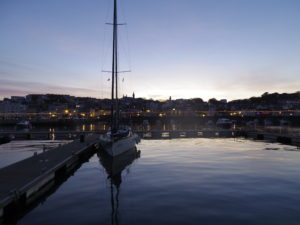 It’s certainly been interesting. We are probably overthinking things a little bit, but we’re just trying to do our best to stay in compliance with all the rules around here.

We’ll have a report on the rest of the sailing portion of our travelogue shortly.

2 thoughts on “2017, or, the year we won the battle with ourselves and learned to love bureaucracy”