As most of you know, we’re planning a westbound transat this winter. For only the 2nd time since 1992, I’ll be someplace other than at sea in Alaska in the middle of winter, preferring to spend a couple of months in the Caribbean on our way to Seattle instead.

I’m not sure if I’m going to have enough time off to bring RS to Seattle on her own bottom, so trucking her may be something that we undertake.

Put it all together, and it’s going to be an expensive proposition any way we do it. So, I’m working more this year-a lot more, as a matter of fact.

I left home on January 2 this year, and have been home precisely 6 days since then, having undertaken a short stint running the 210′ ‘Northern Glacier’, in addition to my normal schedule on the Constellation.

All work and no play isn’t much fun. But, that’ll come later. In the meantime, the fishing continues!

Jenny and I are both really looking forward to a Med mini-cruise this summer, though. I have it on pretty good authority that she likes having me around.

Occasionally, we encounter folks on the dock who seem just a touch resentful that we can go world cruising at our relatively young ages. It always makes me smile just a little. I guess nobody gets to see the effort that goes into making it all happen.

Kudos to Jenny for keeping everything together on the home front during my extended absence, too. 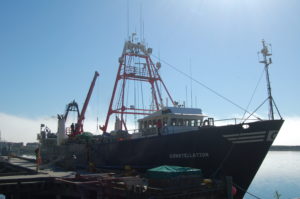 2 thoughts on “The cost of freedom”